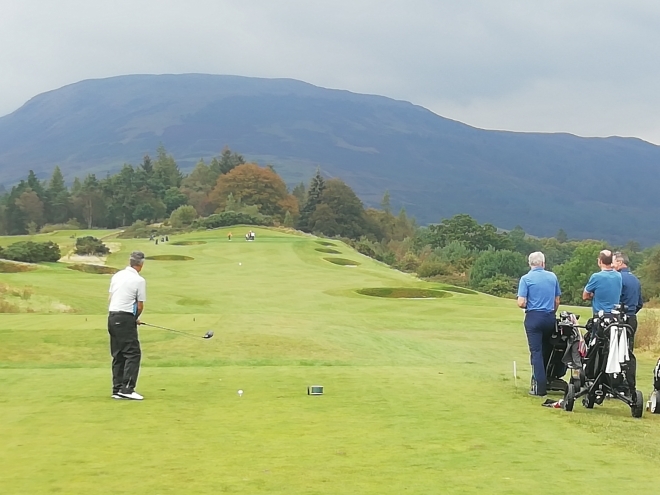 Kestrel regional sales director John Gunn found the fairway with a charity golf day that raised £7,500 for the ‘My Name’s Doddie Foundation’.

Doddie, who earned 61 caps for Scotland, was diagnosed with the incurable disease in 2017.

Kestrel was a sponsor of the golf day, which took place in the stunning surrounds of Cameron House Golf Course, Loch Lomond.  However, it didn’t have the best of starts, coinciding with the Scotland’s ill-fated clash with Ireland in the Rugby World Cup and driving rain.

“Neither the rain or the rugby result dampened our spirits,” John said. “We had 18 teams competing on one of the finest courses in Scotland, for a fantastic cause.

“My job as an organiser was really keeping the teams happy on the day, so I zipped around on a golf cart with some beers!”

To end a day of golf the teams had a meal and auction, led by celebrity auctioneer Bargain Hunt’s Roo Irvine, which raised a stunning £3,000.

“It was an excellent day and raised a good amount for a fantastic cause, thanks to all of the teams who took part, Kestrel as a sponsor and Cameron House,” John added.

To find out more about the My Name’s Doddie Foundation go to: www.myname5doddie.co.uk.