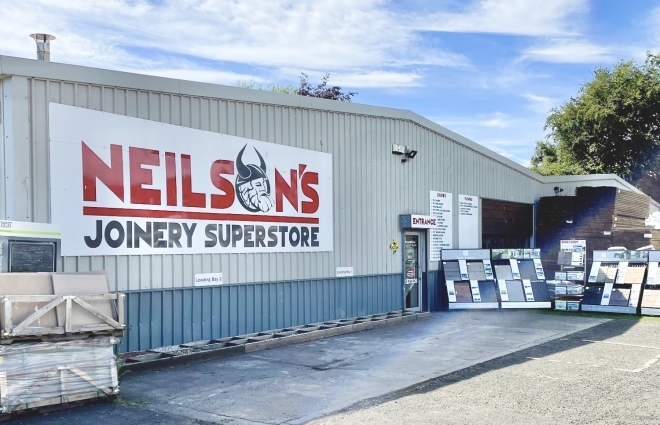 One of Scotland’s most vibrant builder’s merchants, Neilson’s Joinery Superstore in Glasgow, is celebrating its third birthday by becoming a Kestrel stockist.

The fast-growing business, which opened its doors in June 2019, started as a traditional joiner’s merchant but has since expanded its range after listening to customer demand.

“We started with timber but within six months had expanded to become more of a general builder’s merchant,” said Neilson’s Joinery Superstore branch manager Martyn Chalmers.

“As we look to grow the range again, Kestrel was the perfect fit. We have a lot of general, medium sized builders, and we’re confident that Kestrel’s UPVC facias, soffits, cladding, and trims will do well with existing customers as well as attracting new ones.”

The new UPVC fascia, cladding and soffit range is part of wider expansion plans for the builder’s merchant based in Balmore Industrial Estate, north Glasgow, with plans to open in another part of the city next year.

While firmly focused on the building market, the superstore has a lifestyle-inspired showroom, displaying doors, floors, windows, staircases, and ironmongery, amongst other associated building supplies.

Owen Thorogood, Sales and Marketing Director at Kestrel said: “We are delighted have such an ambitious and customer-focused builder’s merchant as Neilson’s Joinery Superstore stocking the Kestrel range.

“At Kestrel, our aim is to offer quality products and customer services and so we look forward to a very positive business relationship with Neilson’s.”