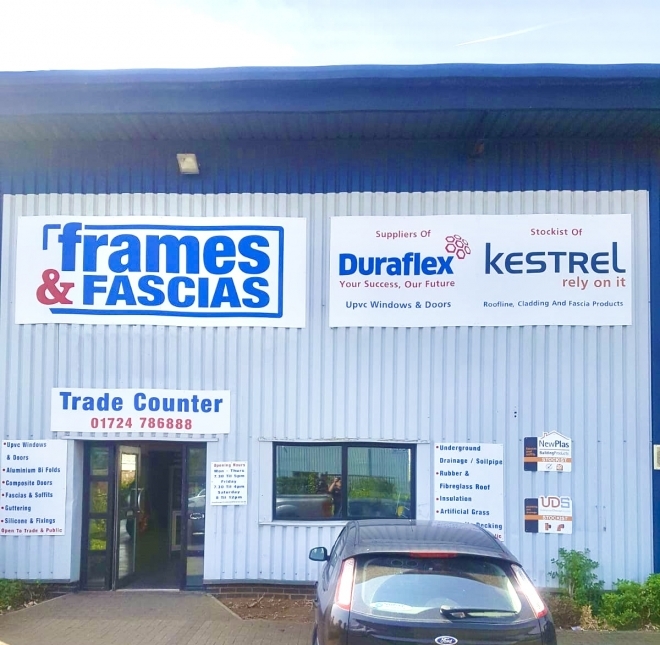 Scunthorpe is lucky no 7 for Frames & Fascias

Seven years after launching its first trade outlet, Frames & Fascias has opened its seventh branch – this time in the home of its long-standing UPVC fascia and cladding supplier Kestrel.

The newest Frames & Fascias branch is a stones-throw away from the UPVC fascia and cladding manufacturer’s HQ, on Normanby Road, Scunthorpe.

Stocking products such as fascias, cladding, guttering, windows, doors ‘and everything in-between’, the company’s general manager, Mick Scales said that Scunthorpe was a natural fit for the trade outlet, which has outlets across the Midlands, and the branch was already proving popular.

“Things are busier than ever,” Mick said. “We keep being told that a there will be a downturn, but we are seeing increased demand if anything, and Scunthorpe has had a flying start.

“Our customer base has expanded, where-as at one point we would serve installers, now a lot of trades will turn their hand to fascias and soffits, this is helping us to grow as we have good breadth of stock.”

Having stocked Kestrel for many years, Mick explained why Frames & Fascias had remained loyal to the brand.

“Kestrel has quality products with good guarantees and its name is recognised in the industry for reliability,” he said. “They have a great range of products and colours, including anthracite grey which is very in vogue at the moment.”

Looking to the future for Frames & Fascias, Mick says they already have their eyes on a few potential sites not too far from Scunthorpe.

Kestrel sales and marketing director Owen Thorogood wished Frames and Fascias good luck on its new branch. “Opening seven branches in seven years is a real feat, but with such a strong team at Frames & Fascias, we know they will take this in their stride. I wish them every luck in Scunthorpe and look forward to dropping in to see the new trade outlet in person!”